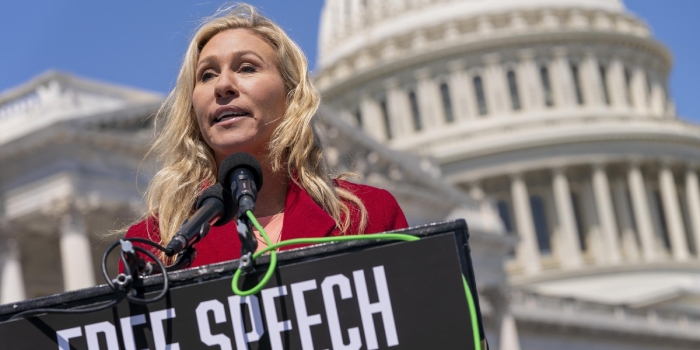 When Marjorie Taylor Greene won a House seat two years ago, the media loved to beat up on her.

And the Georgia congresswoman gave them plenty of material, from her past belief in Qanon to her talk of Jewish space lasers, the “so-called” plane that hit the Pentagon on 9/11, and “Pelosi’s gazpacho police spying on members of Congress.” Even Republican leaders considered her an embarrassment, and the Democrats stripped her of her committee assignments.

Well, the media still love kicking her around. But there’s a sudden realization that Greene has become one of the most influential Republicans on the Hill.

She’s done this with blistering attacks on the Democrats through social media and speeches, building her national brand and becoming one of her party’s most controversial voices. It’s the art of celebrity politics rooted in the Trump era, and she has forced the leadership to take her seriously.

The journalistic reassessment is prompted by a new book by Robert Draper, a New York Times contributing writer. And while it’s titled “Weapons of Mass Delusion: How the GOP Lost Its Mind,” the excerpt on Greene is strikingly fair to her – including on-the-record interviews – and ultimately credits her with forging an unorthodox path to power:

“Greene has gone from the far-right fringe of the G.O.P. ever closer to its establishment center without changing any of her own beliefs; if anything, she has continued to find more extreme ways to express them.”

In fact, Greene says of Kevin McCarthy and the likely Republican takeover, “to be the best speaker of the House and to please the base, he’s going to give me a lot of power and a lot of leeway. And if he doesn’t, they’re going to be very unhappy about it.” McCarthy, for his part, has been on a charm offensive with Greene. That’s quite a journey from the days when Mitch McConnell would describe her views as a “cancer” on the party.

For liberals, Democrats and most people in the press, Greene’s rise shows that her party has capitulated to the MAGA base. She has raised $7.4 million for an easy race, fourth highest among House Republicans and without PAC contributions.

Earlier this month, at a Donald Trump rally, Greene said this: “Democrats want Republicans dead, and they have already started the killings.” In a debate this week with her opponent Marcus Flowers, she said, “the Democrat Party is the party of child abuse,” repressing “grooming children and sexualizing them in school.”

Draper is a prodigious reporter, and he documents the litany of taunts and sometimes factually inaccurate statements by Greene. She called for President Biden’s impeachment on her first day, and has said “Joe Biden is Hitler,” hashtag #NaziJoe. She has called Nancy Pelosi a “b–ch.” She has blamed Jan. 6 on Antifa, called abortion providers murderers and said she wants to purge Congress of Communists, a term she applies to Alexandria Ocasio-Cortez.

AOC also used her social media to become a celebrity on the left (with sometimes groundless statements but minus the conspiracy theories), and that may reflect the new digital reality. Once, new lawmakers had to spend years climbing the ranks from backbencher to subcommittee chairman to leadership material. Now there’s a way to circumvent that drudgery.

After once protesting outside Pelosi’s office, AOC moderated her approach to work with the leaders during her second term. Greene sometimes blasts her Republican colleagues for votes she doesn’t like. Whether she remains a bombastic outsider or an inside force depends on what approach she would take in a GOP House.