The HR Empire
Sign In / Register
Subscribe
Home News BlueCross Moore Appointed to Board of Directors, Executive Roles at BlueShield of Tennessee Jobs in the Chattanooga Region 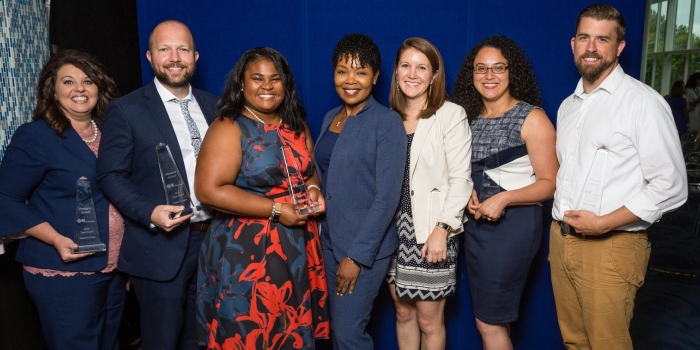 Johnny B. Moore, regional president for the Tennessee Region at Truist Financial Corporation, has been named to the BlueCross BlueShield of Tennessee board of directors.

Moore is Truist’s senior leader in the market, responsible for supporting customers and businesses of all sizes, according to a news release.

“Johnny is an experienced business leader, public servant and committed philanthropist who supports a variety of causes and organizations,” said Emily Reynolds, chairperson of the BlueCross BlueShield board of directors in a statement. “He has unique insights into Tennessee communities that will help us meet the needs of BlueCross members across the state.”

Sarah Mattson, a senior small business specialist, and Madison McCann, the office supervisor and marketing coordinator, were recently recognized during the Tennessee Small Business Development Center All Hands Conference, according to a news release from the community college.

Serving since 2019, McCann was named the Spotlight Employee for 2022. Playing a key role on the Tennessee Small Business Development Center’s website redesign committee, McCann earned her bachelor’s degree in communication studies and entrepreneurship from the University of Tennessee, Knoxville.

State Star and Spotlight awards both recognize those individuals who have demonstrated exemplary work performance, made significant contributions to economic development efforts, and exhibited a strong commitment to small business.

Hannah Buirge has joined Branch Technology as a staff accountant and Ben Lawson has joined the 3D printing company as a digital design specialist.

Buirge graduated from Grove City College in 2021 with a degree in accounting and a minor in Biblical and Religious Studies. She worked in Pittsburgh as a tax accountant at a Big Four firm the following year, where she became well-versed in corporate financials and tax returns on both the state and federal levels.

Officials with the city of Collegedale have selected Ryan Byford as interim director of the Collegedale Municipal Airport, according to a news release. He replaces Chris Swain who retired in July after 16 years of service.

A Chattanooga area native, Byford developed his passion for aviation at a young age. After expressing enthusiasm to watch airplanes when he was a child, his parents would take him to the Collegedale Municipal Airport for their annual open house and various community events throughout the years. At the age of 16, Byford began pursuing his dream of becoming a pilot and he ultimately earned his pilot certificate a year later and continues to be actively involved in aviation.

Byford graduated with a bachelor of science in business administration from Southern Adventist University in 2020 and began working for the City of Collegedale shortly after, where he performed clerical duties at the Collegedale Municipal Airport.

“Ms. Green has served as interim TCAT dean for the past year and has done a remarkable job engaging with faculty and students,” said Dr. Jim Barrott, executive vice president of the Tennessee College of Applied Technology in a news release.

Having worked in Higher Education for more than a decade, Green is on track to receive her master’s in business administration from the University of Tennessee, Chattanooga in May 2023. Her bachelor’s degree in Mathematics from the University of Portland has served her well during her previous roles as an officer, counselor, interim and assistant director of financial aid.

In 2020, Green moved from financial aid to the Tennessee College of Applied Technology division to begin working as the director of student services before being named interim dean for the college the following year.

Hall joins EMJ as vice president for construction in the Southeast

Trey Hall has joined EMJ as vice president of construction in the Southeast office where he will provide day-to-day leadership and strategic vision to the construction operations team, according to a news release.

A graduate from Southern Polytechnic State, Hall brings more than 23 years of construction experience to this role. He most recently served as vice president of construction at BerryHutton where he focused on future business, strategic planning, and improving current systems and work processes. Previously, Hall spent a little more than a decade at EMJ.

“We are excited to welcome Trey back to our team,” Chas Torrence, executive vice president of EMJ Southeast, said in a statement. “His experience, commitment to quality, and client-centric approach make him the perfect addition to EMJ as we continue to expand into new sectors and regions.”

Grisham has been involved with the Urban League of Greater Chattanooga board since 2006. Prior to that, she was on the Urban League of Greater Chattanooga Advisory Board between 1996 and 2006. She served as the board chair from 2017 until 2020 and is currently the immediate past chair. Throughout her tenure, Grisham served on the executive committee for several years and participated on committees for education and youth development, Shoes for School and performance assessment.

U.S. District Court Judge Curtis Collier has been involved with the Urban League of Greater Chattanooga board since 2000. He served on the advisory board for several years before becoming a member of the board of directors. During his tenure, he has been an active board member and a strong supporter for youth civics education and leadership development. Collier volunteers time to read to students in grades K-3, as literacy proficiency is also a passion of his.

BlueCross BlueShield of Tennessee has named Tal Cohen as director of provider data, a new role for the company.

Cohen has been with BlueCross for more than nine years and most recently served as manager of provider data, leading day-to-day strategy, reporting, operations and project management as well as relationship building across the company and with external vendors.

“Tal’s commitment to innovation and continued pursuit of excellence have been key to meeting our goals for provider data planning and reporting,” Stacy Eiselstein, vice president of provider network operations for BlueCross, said in a news release. “His leadership will be instrumental as we continue our efforts to expand our advanced data support and capabilities to further our provider partnerships.”

Cohen earned his bachelor of science in management information systems and is a candidate for the master’s in business administration from the University of Massachusetts.