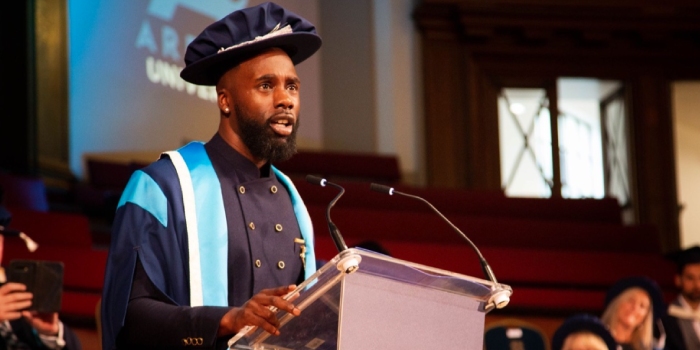 Tru has helped support many entrepreneurs build and monetise their personal brands. He has run a number of prestigious events across the country including the Multicultural Business & Community Champion Awards of which the Business Desk are the official media partners.

Commenting on this, Professor Dilshad Sheikh, Deputy Pro Vice Chancellor at Arden University, said: “Tru’s contribution not only to the business world, but also to the Birmingham community is beyond commendable and is genuinely admirable. It gives me great pleasure to see him becoming an Honorary Doctor of Business Administration and I thoroughly look forward to our continued collaboration.

“His work and commitments strongly align with Arden’s core values. He has demonstrated resilience and progression after having built up his businesses from scratch despite being exposed to racism and discrimination throughout his career; he has shown he is personable and accessible as he always makes time to support and help students via workshops and guest lectures to inspire them; and he is generous with his time, as he is always willing to help the Faculty of Business and our students to aim higher and achieve more.”

Having grown up from humble beginnings in inner-city Birmingham, Tru is now a role model to hundreds of black people across the country. Tru uses his platform to better society at large and often speaks regularly on important topics on national media platforms including Good Morning Britain.

In recent years, Tru has also been recognised with numerous accolades for his work in entrepreneurship and leadership, which includes winning Birmingham’s Young Professional of the Year, the Birmingham Future Face of Entrepreneurship award from the Greater Birmingham Chamber of Commerce, and the prestigious National NatWest Great British Entrepreneur Award, to name but a few. Tru has also been recognised as one of the BBC’s National Future Figures in 2021 for his work with Aston Performing Arts Academy.

Tru strongly stands by and maintains a passion for ensuring all communities should be represented irrespective of race, gender, religion, sexuality, age, or class. And to complement this movement, Tru sits on many boards as an influential leader in the city of Birmingham. He is a Board Member for the Birmingham Hippodrome, The West Midlands Tourism Board and also TAG Network Midlands.

On becoming an Honorary Doctor of Business Administration at the Arden University summer graduation ceremonies this week, Tru Powell commented: “I have always believed it is important to have proper representation in senior positions to create equality, and to be able to work toward championing the causes of equality, justice, and freedom of speech in the professional space is a dream come true. To be recognised for this and to be given such a prestigious award from an institution that takes my values as importantly as I do is something I am extremely proud of and honoured by.”