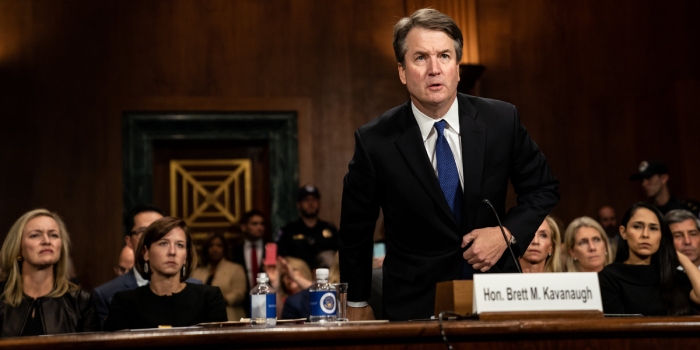 New York Times opinion columnist Ross Douthat said that the liberal media undercut its messaging on the January 6 riot when it downplayed the recent assassination attempt on Supreme Court Justice Brett Kavanaugh and the Black Lives Matter riots of 2020.

The columnist addressed how there was a sense among Americans that “everybody’s implicated” when it comes to condoning political violence, because of how the media covered left-wing violence.

“The last week brought a depressing example of this pattern. As the media geared up to cover the Jan. 6 committee hearings, a young man seemingly motivated by liberal causes – a constitutional right to abortion and gun control – crossed the country with the apparent intention of assassinating Brett Kavanaugh at the justice’s Maryland home,” Douthat began.

He noted that suspect Nicholas Roske wasn’t an isolated case of violence from the left, citing protests outside conservative Supreme Court Justices’ homes and alleged arsons against pro-life pregnancy centers, after the Supreme Court draft opinion leak on abortion.

Yet, Douthat wrote, the media coverage has been “limited” and “perfunctory” at best, despite the gravity of the incident and its implications.

“Kavanaugh’s would-be assassin did make the pages of this newspaper and The Washington Post. But neither that specific threat – a constitutionally substantial one, given that an assassination really could tip the balance of the court – nor the general intimidation campaign has been treated as really big news,” he surmised.

Douthat pointed out that this story would’ve “undoubtedly received” “intensive coverage” from the media if the right had threatened justices outside their homes and attempted to kill a liberal justice.

The assassination attempt didn’t make the front page of The New York Times. Instead, it was relegated to page A20 the following day.

On Twitter, he also called out the media yawning at Democrats for “slow-walking” a bill to protect Supreme Court justices.

Similarly, Douthat said the media’s “pre-existing ideological bias” made it “difficult” for them to accurately report on the rioting and looting happening during the George Floyd protests in 2020. Eighteen people died and there was nearly $2 billion in property damage from those riots.

He argued the media became complicit in encouraging radicalization from the left.

“Again and again, the spirit of emergency has converged with a pre-existing ideological bias to both downplay and tacitly encourage radicalization on the left,” the columnist wrote.

Despite media hype, some Democrats and Republicans have conceded that the January 6 hearings will have little impact on the November midterm elections. Political strategists and polls show the economy to be a top concern for voters.

A May poll by Fox News found inflation and the future of the country were the top two concerns for voters.